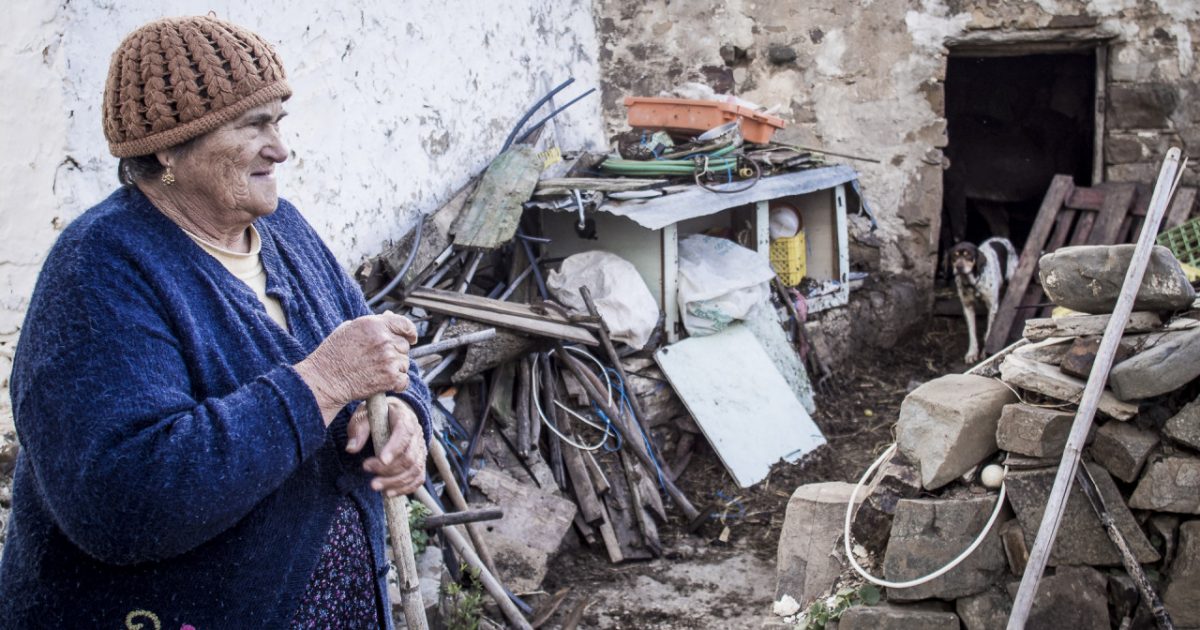 In small Algarvian countryside settlements, houses are crumbling down as the original inhabitants are getting older. Together with its agricultural traditions, bit by bit the rural Portuguese way of life is falling into extinction.

“What would make this place change for the better? Why do you ask? Who’s going to change it?” Maria shrugs. “Oh, you just want to know. A bar? No, not a bar or a restaurant. Who would come and drink here?!” She laughs, recalling a time when some English tourists on bicycles turned up, leaving pretty bewildered when realising there wasn’t anywhere in the village they could buy a cup of coffee. Then she ponders and takes some time to think about the question. Her eyebrows wrinkle as she looks out over the valley, the tea towel she was mending forgotten in her hands. “Some young Portuguese people would be nice,” she says eventually. “I’m over 70 years old and I’m the youngest here. However, I don’t believe this will happen.”

Carriços is located only 7kms north of Tavira, a town on the busy Algarve coastline with over 13,000 inhabitants and a big shopping centre. In the ten minutes’ drive inland, the landscape changes dramatically: once the sea is out of sight, so are the hotels and apartments. Orange groves and golf courses are replaced by hills, rocks and trees. After passing a little aqueduct, the road gets worse until it’s nothing more than a dirt track. Driving along these lanes feels like time travelling; with each kilometre, the clock goes back a decade. Carriços itself consists of a handful of houses, half of them crumbling down, some still inhabited and the rest bought up by foreigners. The name of the tiny village is displayed on the signpost on the M508 north of Tavira, but only between brackets, as if to say ‘it exists, but it’s not that important’.

Still, for Maria and her husband Florentino it’s the place where they’ve lived almost all of their lives. Maria was born and grew up in Carriços, whereas Florentino came from another nearby monte, as these rural communities are called. Montes get their name, which means ‘hill’, from their location. In the Algarve, fertile ground is only found near the rivers. Therefore settlements were built on top of hills, leaving the good soil free to grow vegetables. Once, the entire area was thriving on agriculture and open-field farming, with cattle grazing in the fields and all the land being cultivated. Now, only some patches of farmed ground can be seen. The rest has been reclaimed by nature.

Living in the past

Having always lived off agriculture, Maria and Florentino still plant tomatoes, beans and potatoes on their small piece of land. They own lots of chickens, which are running around the plot, and two donkeys, which are kept in a shed at the back of their house and used to plough the field. Using hand gestures, Florentino explains how the donkeys carry a piece of wood which pulls forward the traditional plough. He never went to school, spending most of his childhood working as a shepherd. Maria followed classes until she was 11 years old and then started working in agriculture as well. For 11 escudos per day, she’d get up at 5am and spend the day in the hills, collecting almonds, carob beans or whichever fruit was in season. “Back then, the escudo was still worth something,” she states.

In the last few decades, a lot has changed in Portugal. Not so much for the inhabitants of Carriços though, who seem to be living in the past. Instead of escudos, there are now euros, but still not many of them as the couple only receives a small pension. Maria and Florentino don’t own a car; there’s no need as they’re are partly self-sufficient and get groceries delivered to the village once a week. Although gas cookers have replaced wood fires when it comes to cooking fish or meat, bread is still baked in traditional ovens. Also washing the dishes is still done outside, on the public water taps in the streets. Maria and Florentino don’t even have a tap inside their house. “Why should we? It’s not necessary and we can’t afford it.”

Manuel Fernandez, who lives on the other end of the village, does have running water; he was the first person in Carriços to get a bathroom in his house. “This happened about 30 years ago, just after the taps were installed in the streets and we got electricity here in the area,” he proudly remembers. “Before that, we’d make a fire when it got cold or dark. We washed in buckets and got all the water, both for ourselves and for the animals, from the river.” The river, the reason why Carriços was built here in the first place, has always played a big role in the life of its people, who vividly remember the big flooding, more than a quarter-century ago, that broke the bridges and cut the village off from the rest of the world. Nowadays, the once-roaring river reduced to merely a stream, the place feels isolated yet again.

Dogs are kept on chains, guarding the houses. Curtains are drawn closed when we walk past. The inhabitants are still familiar with Salazar’s dictatorial regime and wary of unknown visitors with cameras and notebooks. Some are downright suspicious of foreigners.

Luis Antonio and Maria sit outside their house in the sun, in front of their bread oven, and don’t talk much. Their clothes have holes in them and half their teeth are missing, but their eyes don’t miss a thing. They refuse to tell their age, which must be close to 80, but do reveal that they have both lived in Carriços from the day they were born. “When I was six years old, I started helping my father in the country,” Luis Antonio recalls. “We worked with cows and grew wheat, which we’d use to make our own bread. Every once in a while we’d trade our bread and chickens for fish with people from the neighbouring villages. Back then, this whole valley was full of farmers producing food.”

From the fifty Portuguese couples who used to live in Carriços, only five remain. Walk through the empty streets and you see a broken bath tub, as well as other trash, lying around. A wood fire is slowly burning and a pig can be smelled in a shed, but apart from these traces of life, the atmosphere resembles one of an abandoned ghost town. Just as in other parts of rural Portugal, population loss has led to both economic and social depression.

The houses that aren’t inhabited anymore are either left to fall apart or bought up by foreigners and easily recognised by their new looks. Maria and Florentino point them out: “There’s a French couple living, that house belongs to English people, that one to Germans and the property over there now belongs to a Russian doctor.” What do they think about these non-Portuguese people inhabitants? “We don’t consider them villagers,” is the answer. “Most of them only come for the holidays, they don’t really live here. The foreigners don’t work on the land or bring anything to Carriços, apart from change. Some of them even want us to change our ways; they don’t like the fact we keep animals here.”

The French Jose-Manuel and Huguette are the exception: the first outsiders who moved to Carriços, nearly 20 years ago, they’ve managed to integrate successfully. Jose-Manuel’s parents originally came from the Algarve; like many Portuguese, his father left for France in order to escape prison under the Salazar regime. Having returned to Jose-Manuel’s East-Algarvian roots, they’re content in the countryside.

A place without future

The house of the French couple is equipped with all the facilities one might need or want in daily life. Still, for a long time Huguette did her washing up outside on the street, like the Portuguese villagers do. “Small things like that go a long way towards being welcomed here,” she explains. “Now, they offer us home-grown vegetables and home-baked bread. In return, we give them things from the shops in town. The people here are very friendly once you get to know them.” Having lived here for two decades, how does the couple see the future of the village? Huguette’s smile fades: “In ten years or so, there probably won’t be any Portuguese left, only foreigners.” Jose-Manuel adds: “People here are old; they’re dying and their kids don’t want to live here, so their heritage gets lost. It’s sad, but there is no future in this place.”

Carriços isn’t the only forgotten village in the country. In the last decades, young people from all over Portugal have moved towards the coastal areas where tourism means employment. This shift from rural to urban means tiny settlements are slowly turning into ghost towns or being bought up by rich foreigners. Bigger communities like Cachopo, 40km north, found a way to deal with this change. They focus on embracing their rural traditions and have built museums to show their culture and customs. Honouring the expertise of saddle making and medronho brewing, they’ve managed to make a living showcasing exactly the skills that would have otherwise been forgotten.

This works with craftsmanship that makes for pretty pictures, like blacksmithing or palm weaving, but simple farming doesn’t attract much attention. Even if it did, Carriços, like many other settlements scattered around the Portuguese countryside, would be too small. The roads aren’t in good enough condition and with the village lacking everything from a café to a restaurant and a shop to public toilets, tourists won’t even consider a visit.

‘People die. Perhaps so do places’

The younger generation refuses to live like their parents. Instead of using water taps in the street, they want a proper bathroom inside their house, with hot and cold running water, a shower and perhaps even a proper bath. They prefer working in an office to picking olives or herding goats. Manuel Fernandez has a daughter and a granddaughter who he sees regularly. “Every Saturday they come for lunch. They won’t come back to live here though,” he laments. Also Maria and Florentino have children. Although they often visit, none of their kids want to settle in the village.

For their part, the parents don’t care about city life: “Our two daughters live in Tavira, in an apartment. On the street there’s always noise and when they close the door, they’re locked inside. I couldn’t live like that. Here it’s quiet and free,” states Maria. She’s right. It’s very silent indeed; the only sound that echoes through the valley comes from a barking dog. Presumably, in a couple of decades Carriços will be even quieter as the village and its original inhabitants will be forgotten, along with their rural traditions. As a result, the land will lose its identity. Maria and Florentino seem to have already accepted this as a fact. They shrug. “Life changes. People die, perhaps so do places.” 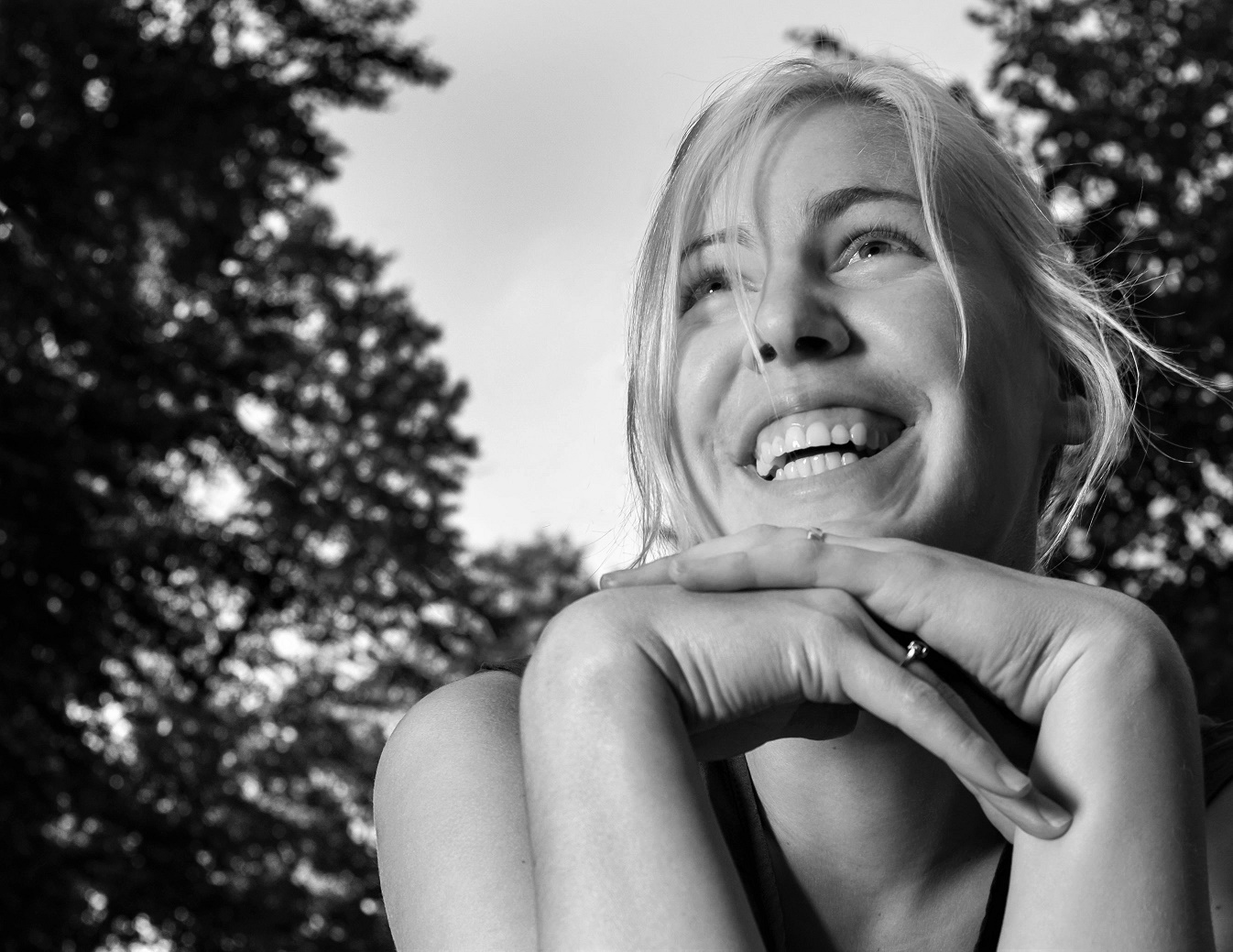